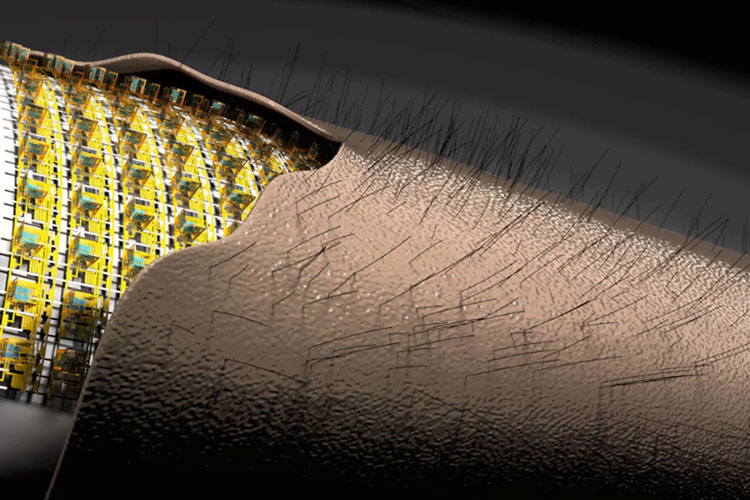 Human skin is both a protection for the body and a source of information from tactile sensations. Scientists have long been trying to create an electronic version of leather that will find the widest application in robotics and prosthetics. German scientists presented their own and unusual version of electronic “skin”, devoting an article to this work in the prestigious journal Nature Communications.

To give artificial skin sensitivity in a wide range of effects from temperature to tactile and pressure, scientists “stuck” it with tiny hairs. Each hair is immersed in the elastic base of the “skin”, and at the end under it holds a tiny magnet in the form of a bulb.

A three-dimensional magnetic field sensor is created around each magnetic bulb, which detects the movement of the micromagnet at the tip of the hair in the entire volume of its movement. Thus, the electronic circuit of the sensor, or rather the array of sensors, accurately determines the location of the touch, the direction of movement of the touch, its strength and other features of the touch (there are several videos on the university website).

But inventing touch sensors is one thing, and developing technology for mass production of such “skin” is another. According to researchers from the Technical University of Chemnitz and the Institute for Solid State and Materials Research. Leibniz in Dresden, who invented the hair sensors, their proposed technology for the production of arrays of magnetic sensors is well scaled to mass and even for production in rolls. Blanks for future three-dimensional magnetic cells are printed on a flat surface and then assembled as origami in 3D structures.

The Lithuanian capital will share window glass with Ukraine